The EPL Match Report Raul Jimenez scored the only goal as Wolverhampton Wanderers beat Burnley 1-0 for their first home victory of the Premier League season.

Wolves had 30 shots as Burnley goalkeeper Joe Hart made a number of impressive saves to keep the scores level. James Tarkowski was also forced to clear off the line. 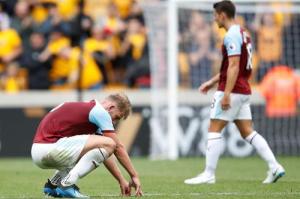 The home side opened the scoring on 61 minutes when Matt Doherty burst into the right side of the penalty area and crossed for Jimenez (pictured) to finish via the left postSubstitute Matej Vydra created the visitors’ best chance, but his volleyed cross was narrowly missed by Jack Cork.

Wolves move up to ninth with eight points, following an unbeaten start at Molineux this term, while Burnley are 19th with one point.

The EPL Match Report:” Two goals from Andriy Yarmolenko earned West Ham United their first points of the season with a 3-1 victory at Everton. 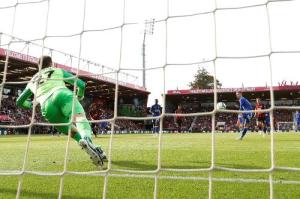 The Ukrainian opened the scoring on 11 minutes, converting Marko Arnautovic’s square pass after the Austrian had been put through.

Twenty minutes later, Yarmolenko had his second, a curling strike from outside the penalty area.

But, on 61 minutes, Arnautovic restored West Ham’s two-goal lead after a one-two with Pedro Obiang.

Man U jumped out to a two nil lead only to hang on at the end to defeat Watford at the Hornets house 2-1.

The Red Devils are in eighth place with nine points.

Romelu Lukaku gave United the lead, finding himself in the right place to convert Ashley Young’s cross with his midriff 35 minutes in.

Watford pushed on in the second half and Andre Gray halved the deficit with 25 minutes to go, arriving late to power home Abdoulaye Doucoure’s cross. 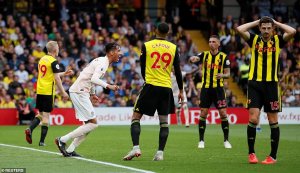 Nemanja Matic was shown a red card in the third minute of stoppage time for a second bookable offence.

In a tense finale David De Gea made an outstanding to deny Christian Kabasele’s header.

United held on to end Watford’s four-match winning run and move up to eighth with nine points. The Hornets are fourth with four wins from five. 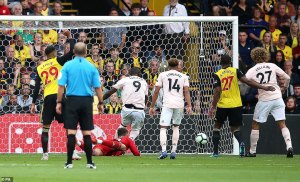 After a scoreless first half my Gunners put this puppy to bed with two goals in a minute span of the second half at Toons house St. James Park to defeat Newcastle 2-1.

Jacob Murphy had the best chance of the first half, but his header was saved by the outstretched Peter Cech. 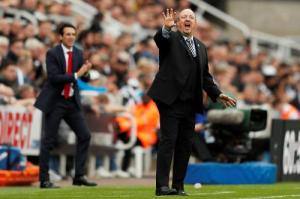 Xhaka opened the scoring four minutes after the restart, curling a 25-yard free-kick into the top-right corner.

Their lead was doubled nine minutes later, Ozil reacting quickest to the loose ball after Alexandre Lacazette’s shot had been blocked.

Substitute Ciaran Clark scored a consolation header one minute into stoppage time, but Arsenal held on for the three points. 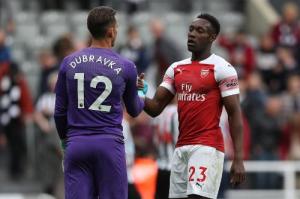 The result means Newcastle are third from bottom with one point. The Gunners rise to seventh on nine. “ 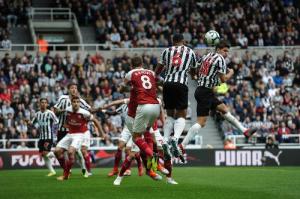 Chelsea jumped all over Cardiff City winning a blowout city special 4-1 at Stamford Bridge. The Blues are now in first place over Liverpool on goal difference. Both have 15 points however Chelsea is a plus ten while the Reds are a plus nine. 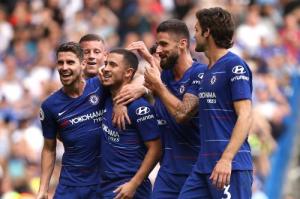 Man Shitty took care of business with a blowout 3-0 win over Fulham at Shitty’s house. Shitty is third with twelve points. 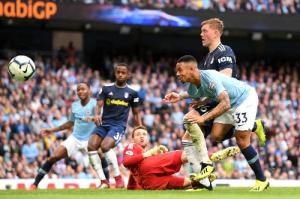 Bournemouth had their way Leicester City 4-2. 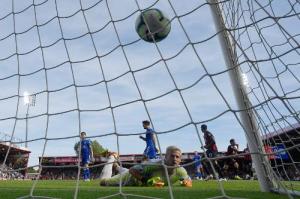 Liverpool is five for five.  The Reds won a thrilling 2-1 win over Tottenham at Spurs home away from home Wembley.

The score is closer than the match really was. Liverpool was in control and totally dominated Tottenham.

EPL Match Report: Liverpool’s perfect start to the new season has continued with a 2-1 victory at Tottenham Hotspur. 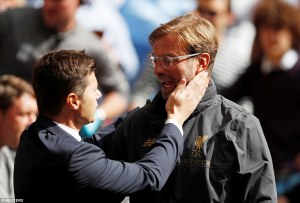 The visitors began strongly and they thought they had taken the lead in the opening minute but Roberto Firmino’s effort was ruled out for offside.

Liverpool finally made the breakthrough six minutes before the break when Georginio Wijnaldum’s header just crossed the line for his first away Premier League goal.

Lucas Moura struck the post for Spurs before Liverpool added a second on 54 minutes when Firmino tapped in from close range. 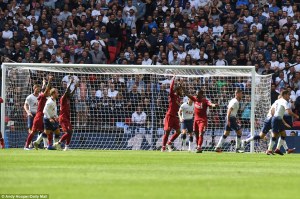 Erik Lamela scored a stoppage-time consolation as Liverpool move to 15 points, three ahead of Chelsea and Watford, who play later on Saturday, while Spurs are fifth with nine points. 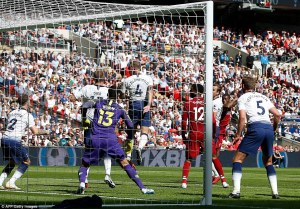 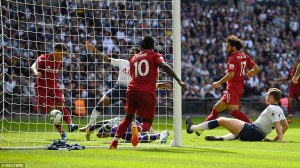 Man U stopped the bleeding with a shutout win over Burnley at the Clarets house. Romelu Lukaku led the Red Devils with the daily double.

Man U stays put on tenth place with six points.

Watford came back to upset Spurs 2-1 at the Hornets house. The loss drops Tottenham to fifth while Watford is a four for four good enough for third place with twelve points.

The Blues are second with a plus seven while the Hornets are a plus six.

EPL Match Report on the Red Devils win:” A double from Romelu Lukaku returned Manchester United to winning ways, with a 2-0 victory at Burnley.

After a bright start from United Lukaku headed them into the lead from Alexis Sanchez’s cross on 27 minutes.

Joe Hart saved from Lukaku after a United counter-attack but could not deny him a second a minute before half-time when a deflected shot fell to him.

Paul Pogba missed a chance to make it 3-0 when his penalty, won by substitute Marcus Rashford, was saved by Hart. 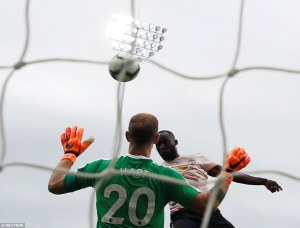 Rashford was sent off shortly afterwards for violent conduct off the ball with Phil Bardsley.

Despite the man disadvantage Lukaku was twice denied a hat-trick when through on goal, first by Hart, then by a recovering Ben Mee.

The win sends United 10th while Burnley are second from bottom.

Arsenal has won two straight matches. The guys are sitting in ninth place with six points.

Shkodran Mustafi gave Arsenal the lead on 11 minutes with a powerful header from a Granit Xhaka corner.

Lacazette struck the woodwork before Joe Bennett crossed for Víctor Camarasa to turn and fire in the equaliser just before the break. 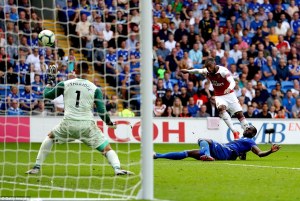 In the 81st minute, Lacazette thundered his effort beyond Neil Etheridge at the near post as Arsenal won for the second successive match.

Defeat moves Cardiff down to 16th on two points, while Arsenal are ninth with six points.

Chelsea scored two second half goals to beat a tough Bournemouth squad 2-0. Pedro tickled the twines in the 75th minute for the one nil lead.

Eden Hazard put this puppy to bed with a strike in the 85th minute. This strike drove  a stake in the Cherries heart for the final score of 2-0.

The Blues have won their first four matches to match Liverpool’s win streak.

The Reds are top dog with a plus eight while Chelsea is a plus seven.

Fulham jumped out to a two nil lead only allow Brighton and Hove Albion to score twice to earn a two all draw.

Wolves picked up their first win of the season when Adama Traore scored in the dying embers of the match 90th minute plus three for the 1-0 win.

Everton and Huddersfield tied one all.

What looked like on paper a blowout city turned into a tussle between Man Shitty and Newcastle at Shitty’s house.

Raheem Sterling opened the scoring with a thunderous strike from long range in the eighth minute to give Shitty the one nil lead. Not to be outdone Toons DeAndre Young nailed a close-range bomb in the 30th minute to level this puppy up at one all.

Man Shitty put this puppy to bed for good in the 52nd minute. Kyle Walker low long range strike found its mark to give Shitty the 2-1 win over Newcastle.

Liverpool scored two first half goals to take a two-nil lead over Leicester City at the Foxes house only to see comical defending to allow Leicester City cut the gap to 2-1.

The EPL Match Report:” Liverpool maintained their winning start to the season with a 2-1 victory at Leicester City.

Sadio Mane opened the scoring on 10 minutes when he fired in after Andrew Robertson charged through and teed him up for his fourth goal in four matches.

Firmino headed in James Milner’s outswinging corner for his first goal of the season. 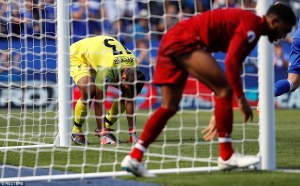 Rachid Ghezzal marked his first PL start for Leicester with a goal on 63 minutes, tapping in after Kelechi Iheanacho dispossessed Alisson, but Liverpool held on.” 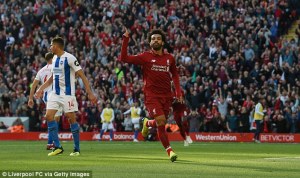 It is about time for Liverpool get out of their mediocre ways. For crying out loud the guys have won eighteen League titles, finally the Reds have hired a man to lead them back to glory.

The Daily Mail:” Jurgen Klopp and Fenway Sports Group have spearheaded the awakening of ‘sleeping giant’ Liverpool – a club starting to fulfil their potential on and off the field, managing director Billy Hogan has claimed.

The Reds currently sit top of the Premier League after three successive victories to start the season, while the club has been transformed off the field in the six years since Hogan joined as chief commercial officer.

In that time, FSG have overseen the redevelopment of Anfield and the impending move to a new training ground, while Klopp has led a resurgence on the pitch that saw Liverpool reach the Champions League final last season.

Hogan claims the club has ‘moved forward quite a bit’ over the past half-decade. 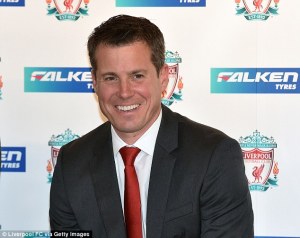 ‘There’s a huge desire to return the club to where we believe it belongs at the top of world football,’ Hogan told the Liverpool Echo.

‘If you go back to when FSG first started looking at Liverpool as an opportunity, people were referring to the club as a sleeping giant. I think that’s something that’s been proven to be true.’

He added: ‘Sitting here today, the club is in a tremendously positive place. The football is terrific, the team is playing great and we’re all excited about the future.’

Hogan also paid tribute to the impact Klopp has had on Merseyside – both on and off the field.

‘Jurgen is a big personality and he’s also tremendously supportive,’ he said.

‘The “Klopp factor” is more than just about his interaction with football, it’s across the whole club. He’s a tremendous fit and we’re so happy that he’s here.’

He added: ‘We’re starting to see the culmination of the strategy we’ve been following. Getting to this place, seeing the way this team is playing and the amount of talent in the squad — seeing what the guys have done at Melwood and the academy — is fantastic.’

Man U got the shit kicked out of them by Tottenham at Old Trafford. Spurs won in a blur 3-0 over the Red Devils.

This could be and will be a long assed season for Man U.

EPL Match Report:” Lucas Moura scored twice as Tottenham Hotspur maintained their 100 per cent start to the season with a 3-0 win at Manchester United.

After an even but goalless first half, Spurs took control with their first goals at Old Trafford since their win there in January 2014.

Harry Kane put them ahead on 50 minutes with a powerful header from Kieran Trippier’s corner. 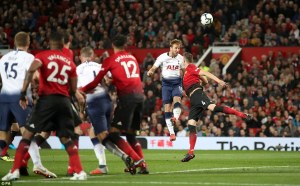 Two minutes and 13 seconds later, it was 2-0, Christian Eriksen crossing for Lucas to score.

Despite the entrance of Alexis Sanchez, United could not get a goal back and Moura ran through their defence to make it 3-0.

Spurs go second on nine points behind Liverpool, while United are 13th. 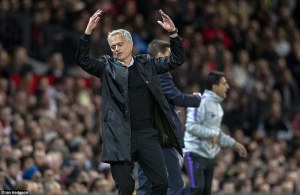