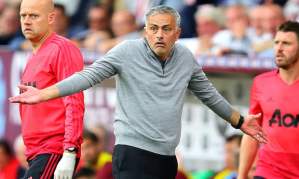 Jose Mourinho is shielding the players according to the Guardians Jamie Jackson.

“José Mourinho’s habit of turning the focus on himself is calculated to help the team and it is working, according to Nemanja Matic.

After Manchester United’s 2-0 win at Burnley Mourinho claimed some journalists would be disappointed his side had not lost. This followed his demand for “respect” after the 3-0 defeat by Tottenham and also his description of himself as “one of the greatest managers in the world”.

Matic said the players understood the manager might be acting like that to shield them. “He knows what he is doing,” the midfielder said. “You [the media] probably know that also. It’s good for us.”

Matic, reflecting on Sunday’s victory at Turf Moor, said Mourinho had not shown any strain. “I think he is dealing very well with the pressure. That is why he is here at Manchester United. I don’t see any difference. He was very confident before the game – he prepared it in a very good way. We knew where they could cause us problems with the long balls; that is why Marouane Fellaini played close to our defence, to stop the long balls.”

Despite two defeats from four matches, Matic believes United can challenge for the title. “I think this performance shows how we need to play football and we can still compete for the title,” he said.

Fellaini supported Mata’s stance. “We have the quality, that’s for sure,” he said. “We have to stick together and play like we did last week in the first half [against Tottenham]. OK, the second half was bad but we have to keep this spirit and think about every game and be positive. I think when we play positive football we do well. The season is long – it’s the beginning.”

The Belgian midfielder pointed to a togetherness that helped drive United to the win at Burnley.

“The spirit was great,” Fellaini said. “Everybody wanted to win. The challenges, the 50-50 balls, everyone wanted to win them; the second balls, too. The spirit is there. The most important thing is the three points. All week we were focusing on this game because we wanted to win.”