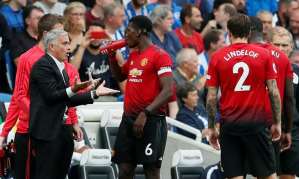 Could this be a start to long hard assed season for Man U?

The Guardians Jacob Steinberg wrote:” José Mourinho said he could not give an honest assessment of his team’s performance after Manchester United slumped to a shambolic 3-2 defeat against Brighton & Hove Albion at the Amex Stadium. United’s manager refused to share any thoughts about his players, claiming he has been criticised by the media for speaking too openly in the past about individuals who have displeased him.

“When I am critical with my players you just don’t accept it, so please do not ask me to go in this direction because it is not good for me,” Mourinho said.

“So don’t ask me to do what you criticised me so much for. Expect from me to be really happy to say after Leicester, A, B, C, D an amazing performance, this and that. Don’t expect me to go in the other direction.”

“They had more hunger than us. I put myself first, that my attitude wasn’t right enough. We made mistakes we shouldn’t make. We tried to push and push, we kept trying, but it was a bit too late.

“We were playing at home last week and that’s different. Different teams, different tactics. I know you cannot always play very, very good. The attitude always has to be very good and we missed that.”

United contributed to their own downfall, making mistakes that allowed Glenn Murray, Shane Duffy and Pascal Gross from the penalty spot to give Brighton a 3-1 lead at half-time. Brighton’s manager, Chris Hughton, felt his side deserved their first win of the season.

“I am very proud with the performance,” Hughton said. “I thought both sides of our game were really good. The tempo was very good. We never allowed them to get into the type of game they would like.”

Before this game Mourinho accused Manchester City of a lack of class after learning that a documentary about the Premier League champions featured digs at his expense. However, Pep Guardiola refused to get drawn into a war of words after his side’s 6-1 win against Huddersfield Town at the Etihad Stadium on Sunday.

“I don’t agree with José in terms of being disrespectful to them. This was not our intention, just to film what happened last season.

“But I think we are a club that is trying to grow, to try to win titles, like all the big clubs in the world, and we did it for ourselves, for the fans, to see what happened in our locker room. But from the beginning the players, everybody in the club, said we are doing it.

“Of course the opponents are there but it’s his opinion, it’s José’s opinion. Another guy is going to say ‘we like it,’ another guy will say no. It’s simple like that. But I agree with him, class you cannot buy.”