Man U picked a huge 1-0 road win at Celtic Vigo ‘s house in the first leg of the Europa League semifinals.

The Guardians Sid Lowe wrote; “José Mourinho finally leapt from the bench after 67 minutes, and headed towards the fans in the corner, clenching his fists. There had been opportunities at Balaídos; now, at last, Manchester United had the goal that takes them a step closer to the Europa League final. Marcus Rashford scored it, bending a free-kick into the corner, and was now on his way towards the bench to celebrate the breakthrough. 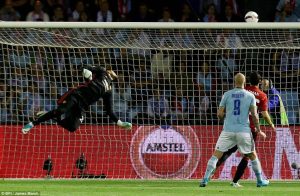 They had been seeking it from the start, performing with the intensity, speed, power and starting XI that underlined that this has indeed become a competition they wish to win. There is still work to be done, a second leg to play, but United are on course. 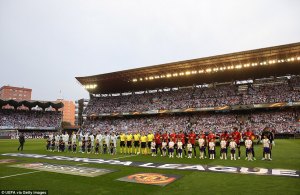 “We came here to win,” Mourinho said, and they did. The advantage is fine, but an away goal will be treasured as a target set. That Celta saw this as a damaging result was underlined by late changes, a final rebellion, but they will consider this alive still.

When Paul Pogba found Henrikh Mikhitaryan just after the half-hour, it may not have been the best of the many opportunities that United had made but it was perhaps the best illustration of the way this was match was shaping up. Pogba strode through the space in the middle, bigger and more powerful than the men in blue shirts around him, and released a sharp pass into the space behind the right-back Hugo Mallo. Mikhitaryan was too quick for him, and headed into the area, only for Sergio Álvarez to divert the shot wide with his foot. 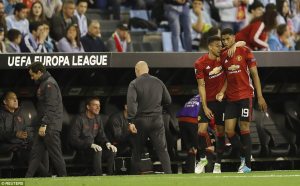 Mallo, a former ballboy at Balaídos, had described this match as a “dream” but he was not enjoying Celta’s first-ever European semi-final. United targeted the space behind him and, exposed, he could do little to stop them. Had Mikhitaryan been a little less honest, Mallo might have been punished for one run beyond him, as he swiped at the Armenian’s legs; had the finishing been better, Celta might have been punished for others too. Mallo was not alone, after all. 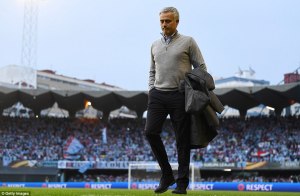 Toto Berizzo likes his team to go man-to-man all over the pitch; the problem here was that his players barely looked like men against United’s athletes. Stronger, faster, higher all over the pitch, they won every duel. Pogba, in particular, constantly burst through, opponents bouncing off him, and into space, the Celta defence backtracking. One run ended with him crashing into the back of Facundo Roncaglia.

On either side of him, the game opened open, particularly for Mikhitaryan, who bent one lovely ball across the face of goal which only just evaded Jesse Lingard and had an opportunity of his own. He often had Rashford in support as he progressed. Mallo had no one; Celta’s midfield is a narrow one and he does not have a natural partner when pushed back. In the air, meanwhile, Fellaini was first to almost every ball; he was first to see a yellow card too. All over the pitch, United were quicker, more incisive. Celta were overrun. 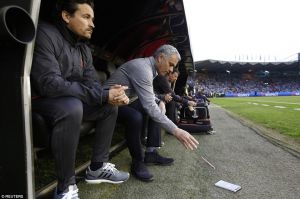 By half-time, Sergio had made four saves. Rashford’s curling effort from the edge of the area was pushed over, but the best of them was from Lingard. Again, the move was a portrait of this game. Fellaini won it, Rashford nudged it into the space and Lingard, on the move already, ran beyond the defence. One-on-one, he should have scored but hit the goalkeeper.

Celta could not get into the game, and when they did get the ball, they were hurried, as if desperate to make it count. They almost did, too. The first really good chance had come their way when John Guidetti, their escape route, curled a lovely ball to the far post for Daniel Wass to head wide. Pione Sisto, too, had a shot that went past the post but Celta were grateful to reach half-time level. 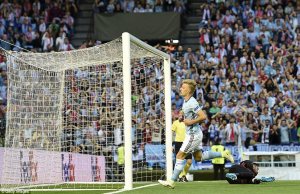 Aspas flicked a header past the post from Wass’s cross five minutes after the restart and, a moment later, he was running at the United defence. He had moved more central and a little deeper, the 4-3-3 shifting towards a 4-2-3-1, and there were signs of life at least. Celta had more presence in the middle where United had previously roamed free, Pablo Hernández soon bursting through to find Sisto. His shot took a deflection off Valencia and dipped dangerously, forcing Sergio Romero into a sharp save. The noise rose. 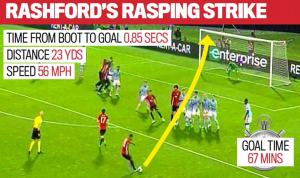 It fell quickly. Rashford raced beyond them on the left, setting off by the halfway line and reaching all the way to the penalty area, only to scuff the shot. When he tried to race past them on the other side shortly after, he was brought down by Mallo, closing the door as he knew he could not win the race. The danger, though, had not gone. Rashford bent a free-kick into the far corner, although Sergio may have felt that it was his post. His step the other way had been fatal; the shot had been fantastic.

It was also set to be final. Aspas’s shot went wide and Guidetti bundled wide after Sisto turned Valencia to cross. At the other end, Lingard had swiped wildly at his best opportunity, but there would be no more” goals. In the end, there was just one at Balaídos. Old Trafford will reveal if one is enough.” 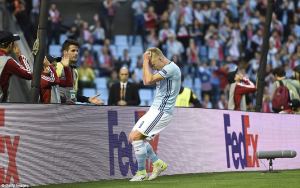 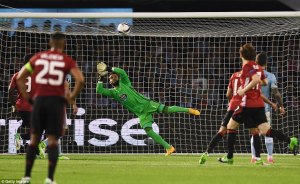